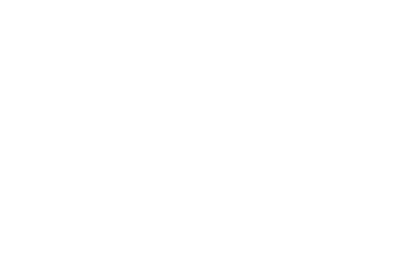 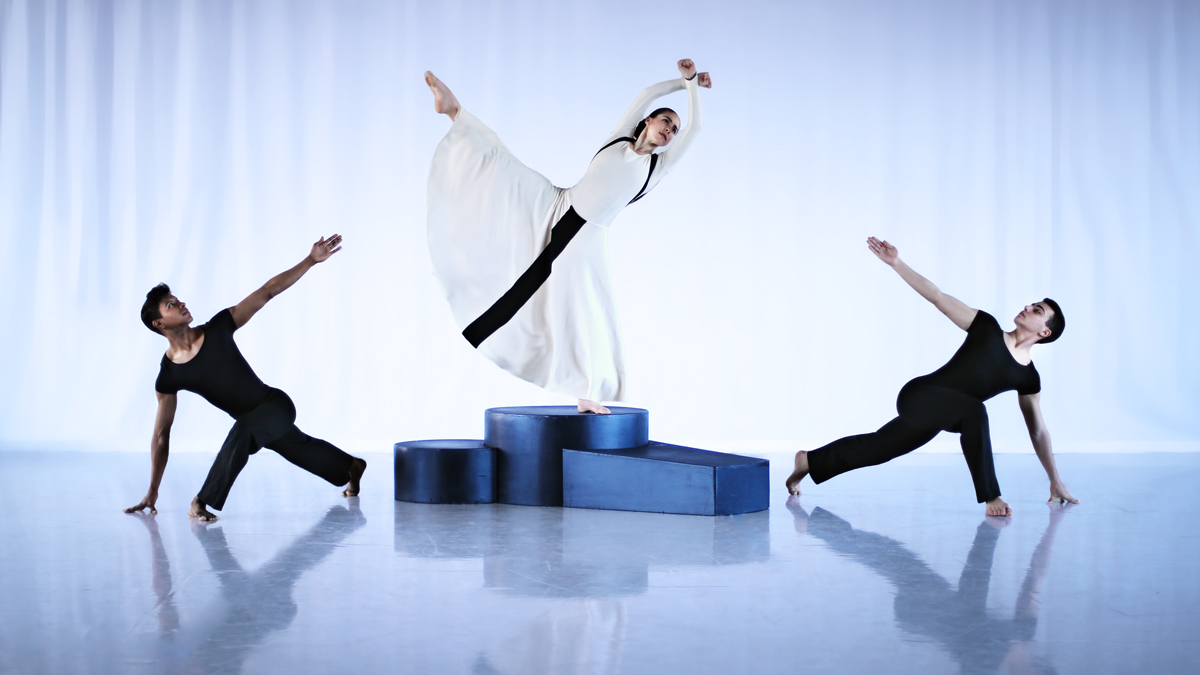 RITUAL TO THE SUN
from Acts of Light

“Thank you for all the acts of light which beautified a summer now past its reward.”
– Emily Dickinson

“Ritual to the Sun” from Acts of Light, a work from 1981, takes its title from a phrase by Emily Dickinson, a poet beloved by Graham. Devoid of theatrical trappings, Acts of Light celebrates the dancer as an exquisite instrument of expression, while making references to earlier works in the Graham canon. Former New York Times dance critic Anna Kisselgoff called the work neo-classical. “Ritual to the Sun,” the final section, is an ode to the Graham classroom technique.

This site-specific dance, Ensō, was created around an existing cemented structure in the courtyard of Westbeth Artists Housing, in NYC. Shaped in an open circle, it reminds me of the Zen Ensō. Zen Ensō is often painted in one or two brushstrokes and embraces creativity with the acceptance of imperfection. The energetic force of the circle also calls for unity which is much in need throughout our present world.

*Special thanks to James O’Donnell, Helena Patilla, and Shelly Staine

THEY WHO DANCE TOGETHER
from Dark Meadow (1946)
by Martha Graham

THEY WHO DANCE TOGETHER
from Dark Meadow

“Dark Meadow is a re-enactment of the Mysteries which attend the eternal adventure of seeking.”
– Martha Graham

The Dark Meadow Suite is made up of highlights from a much longer work by Martha Graham, Dark Meadow, which premiered in 1946. The Suite, created in 2016, is designed to feature the exceptional choreography that Graham created for the ensemble of dancers in Dark Meadow.  Both the unison dancing and the partnering have been recognized as some of Graham’s most architectural, ritualistic and profound creations.  They are clearly inspired by Graham’s love of the rituals of the natives of the American Southwest and Mexico, which she observed as a young woman.  The Mexican composer Carlos Chavez wrote the spacious musical score for Graham. The dancers often work in counterpoint to the score using the sound of their feet and other body percussion effects. In her original program note, Graham wrote, “Dark Meadow is a re-enactment of the mysteries which attend the eternal adventure of seeking.”  It is an abstract work about life’s journey and the search for connection with one’s self and one’s community. This dance is a prime example of Graham as a leader in mid-20th Century modernism.

“Kenopsia shows the forlorn atmosphere of a place that used to be vibrant with people but is now abandoned. This work is influenced by my fascination with the illusion of time and place: in particular, a ghost town called Bodie in California. Also the palettes of a visual artist, Gregory Crewdson’s photographic composition and his play with lighting to create scenes and interactions that capture the narrative depth of the work, have been an influence on my work. By using the best of my dancers’ strengths and techniques, I shape it to fit a narrative layered with multifaceted, theatrical interactions”. -Yoshito

Danced by Yuriko and Bertram Ross

Based on the interplay of the Sun and the Moon originally featured in her ballet, Canticle for Innocent Comedians, Martha Graham draws the male and female sources that define these elements.
Canticle for Innocent Comedians, created in 1952, is considered to be atypical of most Graham works because it reveals some of her most lyrical choreography. The poem-like suite is Graham’s great hymn to nature, and it celebrates the elements – sun, moon, earth, wind, water, fire – in separate little dance odes. Sections of the choreography were captured in 1957 for the award-winning film about Graham, A Dancer’s World. The current reconstruction of the duet Moon, uses the choreography from that film and the score created from improvised music on the film’s soundtrack.

STEPS IN THE STREET and PRELUDE TO ACTION

Chronicle does not attempt to show the actualities of war; rather, by evoking war’s images, it sets forth the fateful prelude to war, portrays the devastation of spirit which it leaves in its wake, and suggests an answer. (Original program note)

Chronicle premiered at the Guild Theater in New York City on December 20, 1936. The dance was a response to the menace of fascism in Europe; earlier that year, Graham had refused an invitation to take part in the 1936 Olympic Games in Germany, stating: “I would find it impossible to dance in Germany at the present time. So many artists whom I respect and admire have been persecuted, have been deprived of the right to work for ridiculous and unsatisfactory reasons, that I should consider it impossible to identify myself, by accepting the invitation, with the regime that has made such things possible. In addition, some of my concert group would not be welcomed in Germany” (a reference to the fact that many members of her group were Jewish). “Chronicle does not attempt to show the actualities of war; rather does it, by evoking war’s images, set forth the fateful prelude to war, portray the devastation of spirit which it leaves in its wake, and suggest an answer.” This is one of the very few dances Martha Graham made which can be said to express explicitly political ideas, but, unlike Immediate Tragedy (1937) and Deep Song (1937), dances she made in response to the Spanish Civil War, this dance is not a realistic depiction of events. The intent is to universalize the tragedy of war. The original dance, with a score by Wallingford Riegger, was forty minutes in length, divided into five sections: “Dances before Catastrophe: Spectre–1914 and Masque,” “Dances after Catastrophe: Steps in the Street and Tragic Holiday,” and “Prelude to Action.” The dance disappeared from the repertory in 1937 and was thought to be lost.  In 1985, Barry Fischer discovered a film by Julien Bryan of the original cast of “Steps in the Street”, which he reconstructed at NYU as part of his doctoral research.  Since that discovery, the Company has reconstructed and now performs “Spectre–1914,” “Steps in the Street” and “Prelude to Action.”

The Graham 2 New York Season 2022 is dedicated to Yuriko
Founder of the troupe under the name of the Martha Graham Ensemble, in 1983.
In loving memory of Yuriko and with our deep appreciation for her immeasurable passion, dedication, and enormous contribution to the Graham legacy. 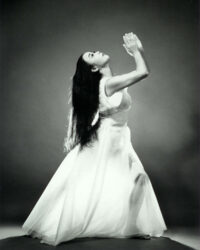 “The issues of our relationship with nature and with one another have become even more energized and urgent during the challenges of the pandemic. These worldwide personal and political concerns motivate all of us to express fresh and bold ideas through art,” said Graham 2 Director Virginie Mécène. “This season speaks to our present time by both celebrating nature and representing our responsibility to living together on this planet.”

Please, consider learning about and contributing toward restoring and maintaining the environment.
See dancers’ favorite charity links at the bottom of this program. 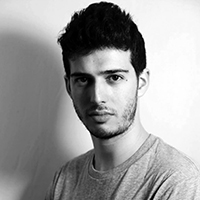 Stahv Danker (musician) was born in Los Angeles and raised in Israel by a very artistic family. Stahv specializes in Drums and Piano. He was accepted to the Israeli Defense Force Musical Collective, where he experienced many different performance settings. Upon the ending of his IDF service, he started his musical education at the New School extension for Jazz and Contemporary Music in Tel Aviv, Israel. Stahv got accepted with a scholarship to the Jazz Department of the New School in New York, where he earned his BFA in Jazz and Contemporary music. Soon after, Stahv was selected to perform a two-week residency at the “Bern Jazz Festival” in Switzerland. In 2019 Stahv was the drummer of the off Broadway “the Office: A Musical Parody” show. He started accompanying professional dance classes as a Percussionist and Pianist in the leading dance schools in NY such as: Martha Graham Dance School (Peggy Lyman Hayes), the Juilliard School (Milton Myers), Peridance Capezio Center, Steps on Broadway, and Gibney Dance. On February 11th 2022 Stahv is releasing his own album that will include 60 tracks of original Percussion and piano music designed for the Martha Graham Technique™ or any other Dance Technique. 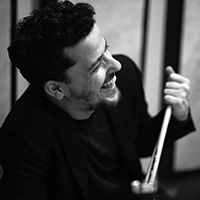 Erán Fink (musician) Born and raised in Israel, Fink has been musically educated in the country’s top schools and earned his degree from Berklee College of Music in Boston. He has been an active drummer in the NYC music scene since moving to the city after his graduation in 2011. As a dance accompanist, Fink has been an in demand musician in New York’s biggest dance schools such as the Martha Graham School, The Alvin Ailey School, and Joffrey Ballet School. Erán is currently in the process of producing his debut album of original music. 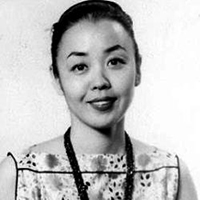 Born in San Jose, California in 1920, she began her dance training with the Konami Ishii Dance Company in Tokyo in 1930. Yuriko returned to the United States in 1937 where she joined Dorothy Lyndall’s Junior Dance Company in Los Angeles. During World War II Yuriko, her mother and stepfather, along with 120,000 other Japanese Americans, were sent to a Japanese Internment Camp.  Assigned to temporary housing that she described as basically horse stalls, Yuriko taught dance classes that were so popular she was voted the Queen of Tulare Assembly Center.

In 1943 Yuriko moved to New York City to study with Martha Graham and was invited to join the company the following year. During her tenure she originated roles in works such as Appalachian Spring (1944), Dark Meadow (1946), Cave of the Heart (1946), Night

At this time Yuriko also became known as an independent modern dance choreographer.  She gave her first solo concert at the 92nd Street Y in 1946. It was an evening of 10 solos, one of which included a set designed by Isamu Noguchi. Graham respected Yuriko’s choreographic efforts so much that she included her in a 1948 presentation of works by three of her most promising dancers. The other two were Merce Cunningham and Erick Hawkins.

Yuriko developed yet another career after she performed in the original cast of the 1951 Broadway musical and later in the film “The King and I.” She starred in a dancing role as the runaway slave Eliza in “The Small House of Uncle Thomas”. The choreography was by Jerome Robbins, who asked her to reproduce it in later productions of the musical, which she did for over 20 years. Yul Brynner, the show’s original male star, asked her to direct the entire musical on Broadway. When she directed several other productions of the musical, which is set in Siam (now Thailand), she cast Asian Americans as most of the Siamese characters; earlier productions had primarily used white actors for those roles.

Yuriko was the recipient of the Guggenheim Fellowship Award for choreography (1967) the Bessie Award (1991), an honorary Doctorate from the Boston Conservatory (2006), the Martha Hill Dance fund Lifetime Achievement Award (2012), and for her trailblazing career in the world of Modern dance the Japanese Foreign Minister’s Commendation (2013).